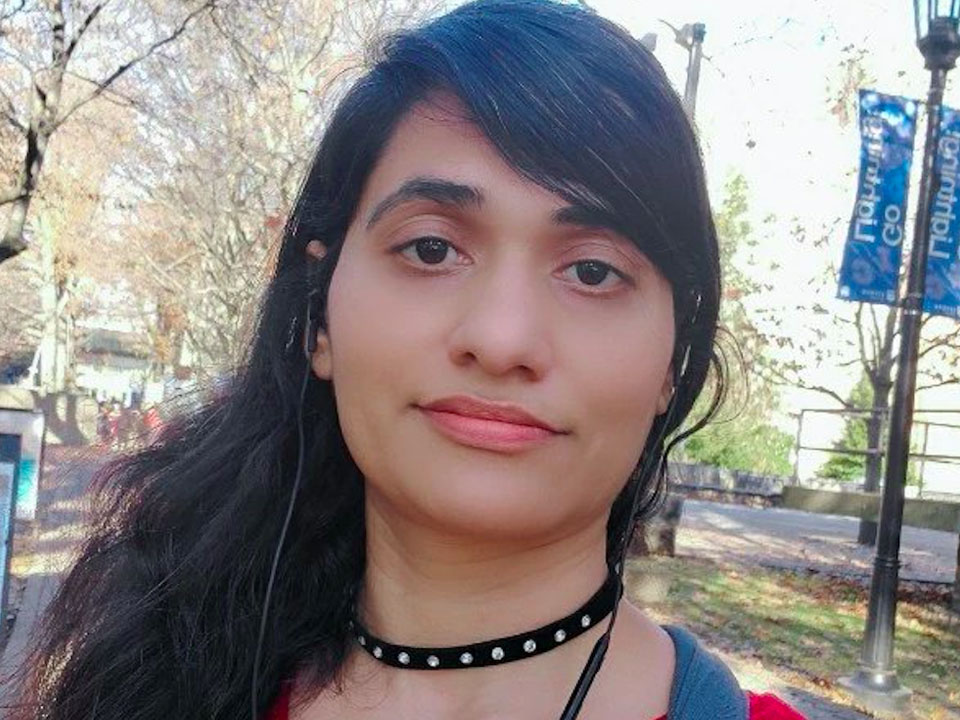 About 20 percent of Americans speak more than one language. Sofia Latif, a third-year Lehman student, speaks seven. Now, thanks to a pair of prestigious study-abroad scholarships, she’s being recognized for her linguistic skills—and is receiving some highly coveted opportunities to sharpen them.

This month, Latif was named a recipient of the Boren Awards, an initiative of the National Security Education Program that funds the study of languages and cultures in regions critical to U.S. interests. She also won a Critical Language Scholarship, a state department program that immerses American college students in intensive instruction of select languages.

Latif is the second student at the College to receive either scholarship and the first to receive both. As highly competitive awards, the Critical Language Scholarship accepts less than 10 percent of applicants, while the Boren Awards accepted approximately 28 percent of undergraduate applicants last year.

“I feel blessed to win,” Latif said. “These scholarships will open doors for me.”

A social work major with a dual minor in psychology and Arabic, Latif learned Punjabi—her mother tongue—as well as Urdu, Hindi, and Persian as a child in her native Pakistan. She also taught herself to speak basic Arabic by reading the Quran and watching online tutorials. Later, after moving to Hong Kong, she picked up Cantonese and English. In addition to her studies at Lehman, Latif works as an interpreter in her local hospital and school systems.

She had hoped to travel to Morocco this summer to study Arabic through the Critical Language Scholarship program, but will participate virtually because of the pandemic. She’ll use her Boren scholarship to travel to Jordan for 11 months in the next academic year and continue her Arabic studies there.

What’s more, she’ll be able to supplement her travels with another prize: In March, Latif received a $1,500 Frederick Douglass Summer Scholars Grant from the Council on International Educational Exchange to fund her choice of study abroad programs.

“This is Sofia’s year, and this is just the beginning for her,” said Sally Cabrera, a program coordinator in Lehman’s Office of Prestigious Awards. Cabrera, a Lehman alumna who graduated in 2019 and was the College’s first Boren winner, helped guide Latif through the scholarship application process.

“I told Sofia about my experience with Boren and how it would be perfect for a passionate language learner like her,” Cabrera said. “She is definitely a go-getter, and there is no doubt that these will not be the last opportunities that she applies for.”

Determined to Make a Difference

The first in her family to attend college, Latif has always aimed high. “Since childhood, I’ve always had a strong belief in myself,” she said. “I always dreamt of something bigger for myself.” At the same, she hoped to elevate those around her, particularly women and girls.

Growing up, there were no educational opportunities for girls in Latif’s village; her parents moved to Lahore, the second-largest city in Pakistan, so she could attend a girls’ school. After her father passed away while Latif was in her early teens, she watched her mother struggle to support the family. She imagined a day, she said, when “women could have the same opportunities as men.”

“It was hard for my mother to raise kids as a widow,” Latif said. “And in Pakistan, there was a lot of injustice around us. I dreamt of becoming more empowered so that we could overcome the disadvantages.”

Her family moved to Hong Kong to pursue a better life and was granted refugee status. However, Latif later learned that refugees were excluded from public universities. “As a refugee, I had to fight immigration policy to enroll in college,” Latif said.

With the help of a human rights advocacy group, she made an impassioned plea to immigration officials, arguing that she had a basic human right to an education. Her efforts succeeded, and she became the first refugee to be admitted to Hong Kong University—with full funding. She attended the university for two years, and in 2012 the family moved to New York.

At Lehman, Latif threw herself into studying social work. She credits a social worker in Hong Kong with helping her family overcome the obstacles refugees face there, including culture shock and financial struggle. It was a pivotal experience that made her determined to one day enter the field.

She also seized the opportunity to pursue formal instruction in Arabic for the first time, though she hoped to expand her learning beyond her 12-credit minor. She found allies in the Office of Prestigious Awards, which worked closely with her to identify and apply to programs that supported her goals.

Latif hopes to merge her twin passions of language and social work. She chose to study in Jordan partly because of the large number of independent nonprofits there that serve refugees and other vulnerable communities. She plans to support them during her year abroad, she said.

Thereafter, Latif intends to apply for a dual degree master’s program in social work and public health. And, because Boren awardees commit to at least one year of public service after they complete their education, she is excited about the opportunities the scholarship will afford her here at home, especially with a fluent knowledge of Arabic and some of its dialects.

Victor Brown, Lehman’s associate provost for Academic Programs and Educational Effectiveness, praised Latif, as well as Alice Augustine, director of the Office of Prestigious Awards, for her diligence and commitment to Latif’s success. The College encourages students to turn to the office for help in shaping their personal and professional growth.

“The Office of Prestigious Awards prepares students like Ms. Latif with the knowledge and skills to effectively compete for national and international awards,” he said. “They are trained to be competent and creative problem solvers, critical thinkers, trendsetters, and trailblazers—not only for their peers but for the next generation.”